The title pretty much sums up the last two weeks here. Two weeks ago Shoshana started vomiting not very often, but a large amount each time. After a day and a half of this I knew she was getting dehydrated so we brought her in to the clinic for fluid bolus and evaluation. After the first fluid bolus, still no urine. So they ordered a second bolus. Well after the second fluid bolus she finally wet her diaper but not with much. The doc hemmed and hawed about whether to keep her or send her home and Shoshana finally did it: she performed in clinic! She threw up 650ml which was everything fed into her stomach since the last vomit. The nurse and I pointed out that that is how much she was regularly throwing up because, apparently, when we say "a lot" it doesn't translate into anything important until you measure it and get something ginormous like "around 600mls." The doc heard how much emesis was measured, lifted his eyebrows, and decided to keep her. Even though I was on the fence at that point I was relieved that we wouldn't be going home with an ongoing hydration problem without any answers as to why.

The next few days were a rotating trial of gut rest, slow gut trial, throwing everything back up, rinse, repeat. Finally, some watery diarrhea prompted a stool test and Clostridium difficile was diagnosed. It is likely the natural gut bug was allowed to grow out of control because of an earlier round of antibiotics combined with her low immune system. Once out of control it is also highly contagious and easily tips the internal balance for other patients in the healthcare setting. It was around seven days after her first symptoms that she finally started to have a little net gain through her stomach. As soon as that happened we agreed to start her fourth round of high dose Methotrexate etc. which is the last one for this phase of treatment. Her gut continued to progress and she stopped dropping weight.

Then the respiratory secretions got bad. Her pain exploded, vital signs started changing, she was cranky, her lungs didn't sound right (though they have sounded poorly in the past for various reasons) but every test we did was basically negative. Some minor signs of infection were seen under microscope from her trach secretions but not nearly enough to explain her symptoms. There was only one thing left to try before requesting transfer to the ICU. She got scoped by ENT and, lo and behold, he saw pus in her right bronchus! Hallelujah, we have a diagnosis! Apparently there is an urban legend among doctors that it is possible to diagnose pneumonia before it is visible on a chest X-ray. Well, there you go medical researchers! It is possible. And I expect to be notified in the near future of yet another case study.

But this all goes to confirm her previous patterns of having severe symptoms before something can even be diagnosed. She sure keeps us on our toes! Sometimes I sigh and wonder why she has to be so special. Can't she just be "standard" for something? That would make everyone's job easier and would probably mean a faster and easier recovery from this damn cancer.

Oh, and we're not even done. The day before Shoshana came home Abi was a little extra cranky and I had a sore throat. The next day we both spiked fevers and wanted to do nothing but lay down and sleep. And the pain. OH THE PAIIIIN. I hate the flu I hate the flu I hate the flu. This is the fourth time I have ever had the flu. The first time was at the age of 22, two months after getting my first ever flu shot because it was a job requirement. Since then I've been forced to get a second flu shot (again a job requirement), again got the flu a month later, but this year I've had it twice without a preceding flu shot. I've worked in healthcare that whole time and traveled three continents before age 22. I don't think it's a coincidence. But that is a blog for a different time.

Shoshana has been home for two days and doing well. Abi is so giggly now that her sister is around and so interested in everything Shoshana does that she is rather annoying. I hope they can both learn some social norms through this. Abi, Shoshana needs space. Shoshana, Abi is so happy to see you!

We haven't taken many pictures recently so here are only two: 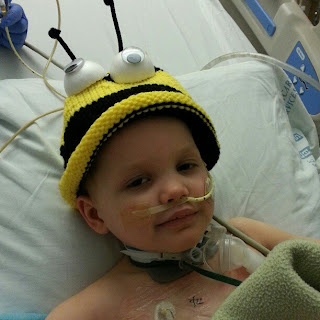 Still pretty wiped out but enjoying her new shipment of hats. 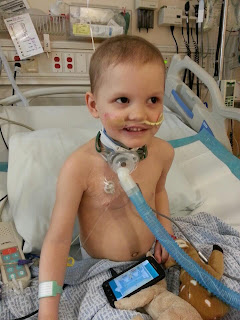 Beginning to feel better. Yes, she has lost weight. 2.5 kilos.

Please also keep our friends Rachel, Merle and their two boys Benton and Wilson in your prayers. Last I heard they were still stuck at Children's trying to manage Benton's pain without overdosing him. Mostly they just want to go home and be in a familiar environment during the coming transition. My heart breaks for them.
Posted by Linguisticnurse at 5:19 PM No comments:

Pain and other things

We had a follow up appointment and lab draw today to see if Shoshana's white blood cell counts were high enough to hit her with more chemo or not. Finally! We can begin her third round of inpatient heavy duty Methotrexate infusion. Since she has been taking longer and longer to "recover" from those treatments they are going to decrease her dose to 80% based on how sensitive she is to all the other chemos as well. It makes sense that she would be sensitive to more than one.

Speaking of sensitivity, she is currently on a 30% dose of Vincristine in an attempt to reduce the neuropathic pain side effect but we're not seeing a significant improvement since dropping the dose from 50%. We saw the pain team yesterday and the decision was to increase the Gabapentin beyond the recommended maximum dose since she isn't showing signs of side effects of that drug yet. After this next dose of Vincristine we will have a more in depth conversation on whether to stop the drug altogether (which would greatly increase her chances of relapse) or figure that she is one of those rare people who have severe side effects with any Vincristine whatsoever and give her a higher dose while focusing harder on managing her pain.

The pain side effect has become such an issue that we once again brought Shoshana to the ER last weekend simply because her pain was out of control and there was nothing more we could give her at home. That was while on two narcotics known as Methadone and Dilaudid as well as Gabapentin which is technically an antieleptic but is the mainstay drug for neuropathy. Besides the glottic stenosis, glottic edema, and tracheostomy, the pain itself is considered a severe side effect. Sometimes she wakes in the middle of the night with severe pain, sometimes, like this morning, she is simply grumpy for a while before admitting she has pain. The goal is that she wouldn't need Dilauded more than 4 times a week. At this point we're at 7-8. Unfortunately, since she is already on a pretty intense pain management regimen any increases to her pain medication will need to be really slow unless she is inpatient where they can monitor her very closely.

Please also pray for a former roommate and his family. They just finished a set of full body scans this week ater their last ditch effort to stop the spread of his rare neuroblastoma. Unfortunately, the scans show cancer all over his body. The mom says they are going home for the weekend and having fun before making any more decisions about his care. They are believers with two sons and they live in Yakima. I cried and gave her a hug through she didn't cry with me. She says that she is still numb from the news last night and hasn't cried about it yet. My heart is breaking for them. She is such a sweetheart and we have a lot in common. Our kids were going through a lot of the same struggles when we met and I was encouraged by her several times. Please pray with me for them.

On a lighter note, here are some pictures of what Shoshana has been busy with recently:

Lunch with a different former roommate (second from the right). She met their new puppy afterward.

Playing with Abi and daddy. I love Abi's expression in this picture. They sure have the best daddy in the world!

At the entrance to the Seattle Children's Museum. She had a great time.

Posted by Linguisticnurse at 5:18 PM No comments: